Adjusting to a table for two. 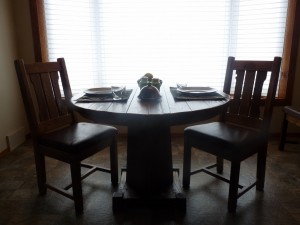 Adjusting to change is never easy.

Last September our daughter joined our son in the ranks of life as a university student.

Both out of province – one to the east, the other to the west. An empty nest. Back to a table for two.

This took about a month to grasp. Living in the country, has always meant stocking up, especially when we had two teenagers in the house. But I no longer needed to head to the till, cart overflowing as if I was preparing for the apocalypse.

Good old meal prep. Cooking just enough for two didn’t seem like an effective use of my time, and leftovers (which I loathed when single, but grew to embrace once married) became far too commonplace.  I soon ensured I stuck to freezer-friendly recipes and eventually managed the size of salads and veggies more effectively.

Fresh-baked goods no longer did their usual disappearing act, so oven to freezer became the norm.  Unless they were destined for a care package – much to the disappointment of my better half, as I stated, “Sorry, they’re for the kids.”

With the kids coming home for a visit my approach reversed. Everyone would be together for three weeks.  I eagerly took requests for favourite meals, snacks and treats.  I was giddy as I stocked the  pantry, fridge and freezer. Some baking was done in advance but oatmeal chocolate-chip cookies and biscuits would have to wait until they were home so they could experience the fresh-out-of-oven aroma and taste!  The kitchen was a happening place and I loved every minute as much as they appreciated it.

Now they’ve returned to school. The twinges of sadness have passed. Shopping was adjusted immediately.  Leftovers consumed, frozen or used in soups.  Baking – well, there are a few remnants however those over-ripe bananas were crying to be made into muffins.  But the next care package won’t go out until the end of the month, so a for a couple of weeks the kitchen is a bake-free zone!

I can relax, peruse cookbooks and on-line sites. New recipes are waiting to be tried! Dinner parties can be planned! Seems like this time round I’m adjusting much sooner to our table for two.

One thought on “A Voice from the Farm Table: Table For Two”