This is part two of a three part “ethnic foods” series. Check back next month for part three.

Canada takes pride in its diversity. We celebrate the ethnicities that influence our own culture. This makes us knowledgeable in ethnic cuisines.

We celebrate culture in many ways. In Manitoba, we have Folklorama, a cultural celebration that brings people from as far as the US to learn about the various ethnicities that make up Manitoba’s diversity.

Participating countries have an assigned venue, known as a pavilion. There are about 40 pavilions throughout Winnipeg in two weeks. Each pavilion puts on shows featuring songs and dances of their culture, along with trademark ethnic cuisine.

This year Folklorama takes place August 4-17, 2013 in Winnipeg. One of the pavilions is the Orient Philippine Pavilion. This pavilion is a huge part of Amirah Mansilla’s life. Amirah is a Red River College baking student and was the runner up in the Manitoba Canola Growers RRC Bake Off this past winter. Her Cassava Cake impressed the judges with its unique taste.

Cassava is a root plant originating from South America. Popular is Africa, South and Central America, India and Southeast Asia, it is a root rich in carbohydrates, mainly starch, and a major source of energy. In raw form, it is similar to a sweet potato in appearance, with a thick brown outer layer.

Amirah’s cake is very special to her. She adapted her mother’s recipe and brings a flood of childhood memories for Amirah. “When I was around 6 years old, my mom would prepare the cake for a birthday or housewarming and she would allow me pour and spread the condensed milk topping,” Amirah recalls. Seeing the cake after it was baked made her like the idea of preparing something, being able to see the result and enjoy it afterwards. “Cassava cake is one of the desserts that sparked my love for baking,” she confesses.

Although you won’t find Cassava Cake at the Orient Philippine Pavilion, you will find another one of Amirah’s favourite Filipino desserts. Amirah loves turon, a sweet deep-fried banana spring roll. She says you can special order the Cassava Cake at Jejomar’s Bakeshop, or you can make it yourself with the recipe below! 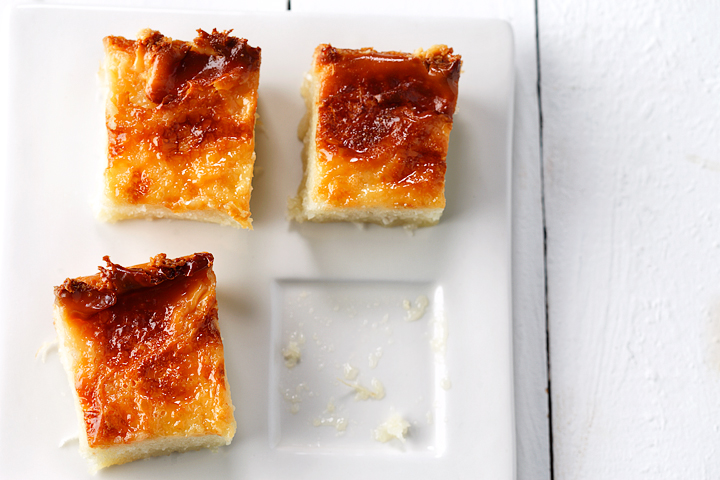 1. Combine eggs, sugar, canola oil and vanilla in a large mixing bowl. Beat on high speed for 3 minutes.
2. Add the remaining ingredients and mix on low speed to combine ingredients, about 1 minute.
3. Pour mixture into an oiled 9×13 baking pan.
4. Bake at 350F for 1 hour. 5. Turn oven setting to broil. Broil cake until top of cake is golden brown, about 2 – 3 minutes.

Where to purchase cassava

You can find it in Caribbean, African, Asian and Latin American stores. In Winnipeg, it can be found at Dino’s, Young’s, Lucky Supermarket, El Izalco, Marvin’s Food Store and even at Superstore (in the freezer section).