Farmer from the start, mom to Georgia and Jayla, Saskatchewan proud and finding the sweet spot in family life and shared stories.

Stacey Sagon has a hard time pinning down exactly what it is she loves about a life in agriculture. “I honestly love it all,” says the Saskatchewan farmer and crops inputs manager. “I love seeing how other farmers do things. I love hearing their stories. And I also love connecting with people outside of the ag world.”

It’s her unbridled enthusiasm that won her a spot on a panel at the esteemed Royal Agricultural Winter Fair in Toronto in November 2020. “The fact of the matter is that I have a hard time saying no! But I’m really excited to be with two other Canadian farmers to share our stories,” she said.

A little bit of history

Sagon grew up on a family farm in Saskatchewan. Her dad worked in the oil industry while her mom and two sisters took care of daily operations. While earning her ag degree at the University of Saskatoon, Sagon met Mark. They started farming together in 2010 while he continued to work in the oil industry.

Sagon said they were fortunate to have a good start in farming. A few pieces of machinery were at hand and rental land came at a fair price. The pair were married in 2014 and the family has grown to include four-year-old Georgia and two-year-old Jayla.

Sagon said they’ve had a good first decade of farming. The weather has cooperated for the most part and prices have been steady, she said. “We haven’t had any complete crop failures and we seem to have found a comfortable middle ground with the size of our operation.”

Last year, the Sagons added a 100-head beef cattle operation to their farm. They grow a variety of crops, including canola, wheat, oats, barley, peas, and lentils on roughly 2,200 acres.

Attitudes toward farming, and particularly toward women in farming, have certainly changed for the better over the last few decades, Sagon said, adding that social media has played a huge role in delivering information about agriculture to a wider audience.

“I think there’s a lot more pride in farming now than there used to be. Farmers are comfortable talking about what they do. And I think there’s more understanding about the entire industry,” she said.

The future of farming

Optimism is a word that figures prominently in Sagon’s vocabulary. “As farmers, that’s par for the course. We always maintain our optimism because there’s always another growing season ahead,” she said.

Sagon is looking forward to her children being involved in the farming world through clubs like 4-H. She’s also committed to being part of her community.

“I believe that everyone has to do a part, serve the community, take a turn,” she said. “Everyone has a story to tell and this is how we move ag forward, by putting in the time to get the message out.”

Mark has now left his job in the oil industry and works full time on the farm while Stacey continues to work off-farm with Parrish & Heimbecker. “On the farm, we both have our strengths, and we seem to have found a sweet spot as far as the size of our operation goes,” she said. “Sometimes success can be measured in something other than the size of your farm.” 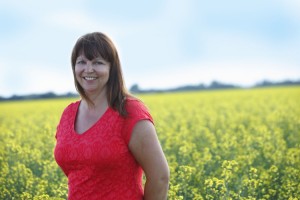 Shel writes about the outdoors, travel and food when she’s not playing outside, on the road or eating at www.shelzolkewich.com.

Her adventures have included a trip to the tundra to serve as a cook at a caribou hunting camp and making a long-overdue journey to Ukraine with her dad Merv.