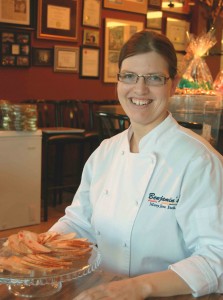 There is no doubt in Chef Mary-Jane Feeke’s mind when asked what is at the top of her favourite recipes list. It is her chiffon cake. And it includes one ingredient that she can’t image being without- canola oil. “I don’t think I could bring myself to bake or eat something that wasn’t made with canola oil because of all the saturated fats it would contain. We all try to eat a little healthier and this is an easy way to do it, “said the Red Seal Baker.

Chef Feeke’s enthusiasm for canola doesn’t end there. At Benjamin’s, her restaurant and catering company in Selkirk, Man., she’s forever finding ways to add canola to her recipes. There’s the spicy snack mix where the nuts are tossed in canola, the 20 or so cookie recipes and of course, the carrot cake. “That’s the first product that we really became known for and it’s still a huge favourite. People just love it. I love it!’she said.  In addition to being a Red Seal Baker and owner of Benjamin’s, Feeke is also a Red Seal Chef and instructor of the Professional Baking program at Winnipeg’s Red River College. She’s the mom of two young children.

Feeke’s boundless energy and enthusiasm for food is continuously taking her down new paths. Soon after opening in 1999, Benjamin’s quickly became known for its wedding cakes.  “It’s such a labourious process but in the end, you truly have a work of art,”she said.  When the restaurant added a wood-burning oven in its courtyard to serve pizza, Feeke quickly found her love of bread making was rekindled. “I met a young woman in Kelowna who was so passionate about baking and all she wished for was a wood-burning oven. I had one in my backyard. That weekend I came home and started baking,” she said, “Bread is alive. That’s really the only word for it.”

Lately, Feeke’s efforts have turned to chocolate making. She admits that she came by it honestly. Her parents were reps for World’s Finest Chocolates, a line of bars and almonds sold for fund-raising. Benjamin’s started doing chocolate fountains a couple of years ago. Traditionally, cocoa butter is added to the mix to add fluidity to the chocolate. Feeke discovered that adding canola glossed up the product without changing the flavour. It was also a much more economical additional than cocoa butter.  She now uses canola in her hand-made chocolates that are quickly becoming a favourite among her customers. She’s even found a way to used butter-flavoured canola in a ganache recipe that gives the final product a much creamier feel. For a dark chocolate treat, Feeke uses local honey and cold-pressed canola “with its nutty taste”as a filling.

“I think we sometimes take canola for granted because we’ve always had it in Manitoba. We have lots of fabulous local products in this province and canola is most definitely one of them,” she said.

To celebrate Valentine’s day, try Chef MJ Feeke Orange Truffle recipe.  Dark Chocolate is full of antioxidants and so is canola oil. “Often when you use butter, truffles become difficult to roll, due to its high saturated fat level. Canola oil is a great choice as it has a low saturated fat level which is why it remains a liquid at room temperature. This is the key for rolling the truffles successful. That little bit of fat helps to have that great mouth feel.” states Chef Feeke.

Pour ganache into a 9 x 13 inch cake pan and let set. Scoop small amounts of the ganache out and roll into a ball. Sift together cocoa powder and icing sugar. Roll gently each ball in cocoa powder mixture.